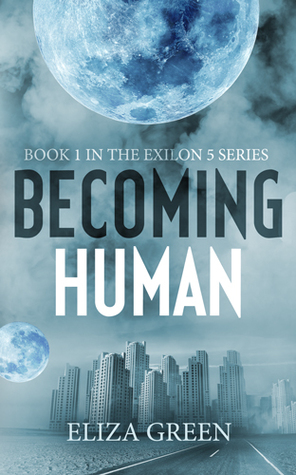 A VENDETTA. A DESIRE FOR FREEDOM. A SECRET THAT WILL CHANGE EVERYTHING.

In 2163, a polluted and overcrowded Earth forces humans to search for a new home. But the exoplanet they target, Exilon 5, is occupied.

Having already begun a massive relocation programme, the World Government on Earth sends Bill Taggart to monitor the threat level of the Indigenes, the alien race that lives on Exilon 5. Bill is a man on the edge. He believes the Indigenes killed his wife, but he doesn’t know why. Until now.

Stephen has every reason to despise the humans and their attempts to colonise his planet. To protect his species from further harm, he must go against his very nature and become human.

Laura O’Halloran is losing her daily battle with Seasonal Affective Disorder. Her only chance at recovery is leaving the dark Earth for the sunnier climate of Exilon 5. She hopes her credentials as a World Government employee will secure her a one-way trip, but with the ever increasing relocation demand that is not a guarantee.

Her discovery of a deadly secret threatens her life and that of Bill and Stephen. A secret so great it could rip apart both worlds.

END_OF_DOCUMENT_TOKEN_TO_BE_REPLACED

You have to keep moving forward, he says. But I am afraid of change. Change will kill me. When their hometown of Brookfield is poisoned by radiation, seventeen-year-old Anya Macklin and her older brother Jason are relocated to the safe but boring urbano of Essention.

While Jason is put to work, Anya is enrolled in the adult skills course at Arcis, a secretive and heavily monitored education facility. There she must compete with other teenage recruits and earn her place in society by reaching the top floor.

At first, Anya fears change, and is reluctant to advance. But then she meets Dom Pavesi, a brooding, evasive stranger who drives her to discover the rules of this dangerous game where there can be only one winner.

Who is Dom? Which side is he on?

And what terrible truth awaits Anya on the ninth floor of Arcis?

Feeder is Book 1 in the Feeder series.