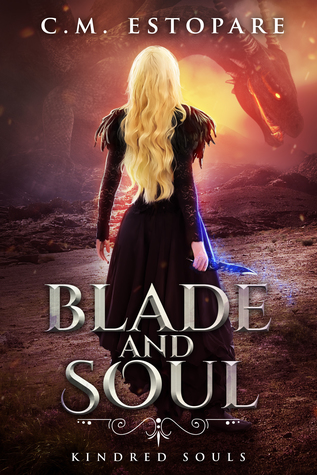 To defy gods, she will sacrifice all.After the death of its duchess, Safrana is in turmoil. Two equally powerful families vie for power, quickly turning the beautiful citadels of Safrana into a hellish warscape. While, on the outside, there is a desperate search for the one true heir to the throne. The one man who could stop an encroaching civil war and force the citadels into peace.

But he is nowhere to be found. Presumed dead. While a threatening war looms over Safrana, promising to tear it apart.

Thrust into a political world which only buys and sells in blood money, with an impending civil war at hand, Marceline Brandy is called to take charge of a peace effort in a foreign city. But nothing is certain in this world rife with political strife. Everything must be questioned, even a push for peace.

Desperate to complete her mission, Marceline soon finds herself tangled up in the strange political affairs of an arrogant woman with dangerous ties to the long lost heir of the Safranian throne. But there is another, more powerful presence that lurks on the borders of Safrana’s imploding government. A presence that would stop at nothing to see Marceline and her allies fail.

Seized by a foreign city she is sworn to save, she has few to turn to for help. The list of allies she could count on is cut short by corrupt patriotists hungry for war and livid at the mere notion of foreign driven peace. Months pass as Marceline heads this peace effort, but the fiercer she works the more dire the situation becomes and time is running out.

A war looms, one that promises to destroy Safrana, as mythological creatures rise from ancient graves. The fiends intent on absolute destruction.

Is this an all-out test of Marceline’s strength and will?

Or, are the gods themselves against her?

END_OF_DOCUMENT_TOKEN_TO_BE_REPLACED

Details of the sea witch’s banishment have been exaggerated. The body count that preempted it was not. Once an illustrious princess, her hands and tentacles were stained with the blood of thousands. No one could comprehend how the hooks of madness dragged her down from her life of privilege.

Born Princess Vanessa of Atlantica, the ambitious young royal was one of two children born to the great King Poseidon. She and her brother, Triton, were groomed from birth to rule. Yet only one would ascend that coveted throne. While carefree Triton flits through his training with a cavalier demeanor and beguiling charm, Vanessa’s hunger for her father’s acceptance drives her to push herself to the limits of magic, and combat to become a leader worthy of her people.

When war against the humans ravages their once regal kingdom, political sides are chosen. Factions from the seven seas challenge the existing leadership, pitting Vanessa against her brother in a vicious battle for the crown. Traitors are exposed, dark family secrets revealed, and a once strong sibling bond is strained to its breaking point.

Only when the ink black waters from the ultimate betrayal rescind, will the truth be known of how the villainous sea witch rose with one name on her vengeful lips–Triton.

END_OF_DOCUMENT_TOKEN_TO_BE_REPLACED

Sixteen-year-old Farris is picking up the pieces after the untimely death of her best friend. But even one year later, she can’t seem to find “normal” again—not until Lane Evans pops back into her life and pushes her to face reality. When he offers her the chance to find the truth, Farris fears what will surface. Is it too much too soon or just what she needs to move forward?

END_OF_DOCUMENT_TOKEN_TO_BE_REPLACED

Liza Petrov’s entire life has been about skating and winning her sport’s top prize – Olympic gold. She’s stayed sheltered inside her bubble, not daring to stray from her destined path.Until she meets Braden Patrick.

He makes her heart flutter with possibility, and for the first time she gets a taste of a normal teenage life. She longs to have both the boy and the gold, but stepping outside her bubble comes with a price. As Liza begins to question both her future and her past, can she stay focused on the present and realize her ultimate dream?

END_OF_DOCUMENT_TOKEN_TO_BE_REPLACED

Most teenage girls know their name, where they came from, who they are. Not G, a beautiful redhead with unusual markings on her wrist. She gets her name from a silver locket she keeps around her neck, unaware the engraved letter “G” on its front holds the secret to her past.G’s life before the age of six has been a mystery to her. Each night for the last twelve years she’s been haunted by the same nightmare—a war. Horrendous beasts, warriors able to wield the four elements, and a boy who saves her by means of blue fire taunt her memory. But on her eighteenth birthday, G’s life begins to unravel. When she meets her new Chemistry professor, a man with an uncanny resemblance to the boy who saves her, she knows there must be more to her dreams.

It’s dangerous not knowing who you are, what you’re capable of, and what future awaits you. Especially when the darkness that slaughtered your entire world, just found you.