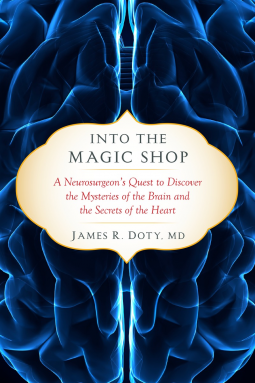 Disclaimer: I received an ARC of this book from NetGalley in exchange for an honest review. I would like to send a big thank you to NetGalley for this book, and also to everyone at Penguin Group – Avery Publishing, as well as James R. Doty himself.

About the Author (Amazon): Dr James Doty is a Clinical Professor in the Department of Neurosurgery at Stanford University, and the Director of the Center for Compassion and Altruism Research and Education, which he cofounded with the Dalai Lama. As the Director of CCARE, he has spearheaded many research projects on compassion and altruism, and their relationship to the brain. He is also an inventor and philanthropist, sitting on the board of a number of charities, including Friends of New Orleans (FONO) and the Dalai Lama Foundation of which he is Chairman.

Growing up in the high desert of California, Jim Doty was poor, with an alcoholic father and a mother chronically depressed and paralyzed by a stroke. Today he is the director of the Center for Compassion and Altruism Research and Education (CCARE) at Stanford University, of which the Dalai Lama is a founding benefactor. But back then his life was at a dead end until at twelve he wandered into a magic shop looking for a plastic thumb. Instead he met Ruth, a woman who taught him a series of exercises to ease his own suffering and manifest his greatest desires. Her final mandate was that he keep his heart open and teach these techniques to others. She gave him his first glimpse of the unique relationship between the brain and the heart.

Doty would go on to put Ruth’s practices to work with extraordinary results—power and wealth that he could only imagine as a twelve-year-old, riding his orange Sting-Ray bike. But he neglects Ruth’s most important lesson, to keep his heart open, with disastrous results—until he has the opportunity to make a spectacular charitable contribution that will virtually ruin him. Part memoir, part science, part inspiration, and part practical instruction, Into the Magic Shop shows us how we can fundamentally change our lives by first changing our brains and our hearts.

Since my copy is an ARC, the book is not perfect. I am referring to the technicalities/aspect. The Kindle version needs to be cleaned up, and organized. I would’ve also liked to see a page about the author, and a picture.

Despite its title, this book is not a work of fiction. It is not about the kind of magic we read in books like Harry Potter. The magic shop is a store for magicians, also known as illusionists; it has objects that help them do magic tricks. Into the Magic Shop is about Mr. James’s life, and the life lessons he learned.

The book has 3 parts, and 13 chapters. Most chapters have around 20 pages each. For me, the first part of the book was a little bit slower than the rest of the book. Don’t get me wrong, it is still very interesting.

Into the Magic Shop is not that kind of book to read just to relax, and forget about your bad day. It requires your attention, especially if you want to learn something from it; and there are plenty to learn.

Since the book is more or less a memoir, obviously it is told in a first person narrative. The book is well written, and it does not focus on meaningless things.

I hope Mr.James will write more books, especially about neurosurgery, the brain, and what he had found in his research. I’ll definitely read them.

I’ve read other books about the brain, since I find it fascinating, but most of them were strictly scientific. However, this book is not focused that much on it, even though we do learn a little bit about the brain itself, and how it is to be a neurosurgeon. It is more about Mr.James’ life lessons, and what Ruth thought him as a child. (Based on the information from this book, Mr.James is around 59 years old. )

Mr. James is a survivor, not a victim. I always say there is a big difference between a victim and a survivor.  He is also that kind of person who changed for the better, instead of making similar mistakes over and over again; he learned from his mistakes, instead of blaming his misfortune on others. I really think that his patients are very fortunate to have him as their doctor.

This books tells us Mr.James’ life story. The first part of the book is about Mr.James’ childhood, and his family situation. It is also dedicated to Ruth, and her lessons. Ruth’s “magical tricks” are mentioned throughout the whole book, since Mr.James himself understood them completely only when he was in his 40s. I think the book is another way to keep his promise to Ruth: teach other people what she though him.

One of the biggest lessons Mr.James learned is that “what you want, is not necessarily what is good for you” (I’m paraphrasing). There is another saying, with similar meaning: Just because something feels good, it does not mean it is good for you.

I do not agree with everything Mr.James wrote, since I see life a little bit different – we have different beliefs. However, the book contains facts and truths nobody can deny (well, they can, but sooner or later reality will strike back, and slap them in the face).

I recommend this book to everyone who wants to learn more about life. People can take important tips from this book, especially since the author was a multi-millionaire that lost his fortune. Apparently, when you lose your millions, your friends disappear faster than you can say “Abracadabra”. Also, Mr.James was a poor kid, who managed to succeed in life, and we can all learn something from him, especially from his mistakes (I don’t recommend to anyone to drink and do cocaine in order to cope with life – I think Mr.James would agree). Ruth’s “magic tricks” are also very interesting, especially since today, they can be based on science.

Overall, a nice, and interesting read.

3 thoughts on “Book Review: Into the Magic Shop, by James R. Doty”