The Time for the final battle has come.

Edmund’s armies have surrounded the Rioseco Abbey, trapping the few survivors inside. The sight that Ilyan was given a thousand years ago is about to come to pass.

If only Joclyn was able to fight.

Joclyn is tormented by the hallucinations that Cail’s mind has left her with, her magic an uncontrollable torrent that even Ilyan cannot control. Her moments of lucidity are broken by fears of dripping pipes and bleeding walls, and a desire to kill Ryland that she is having trouble trying to ignore.

The sight has shown her power, shown her success, but it has also shown her death – The end of her life something she is not quite willing to give up on yet.

Even past her death, the sight has shown her love, and that love may be the only key to her sanity, to her strength, and to Edmund’s death.

That love may stand in her way, and a single choice may tip the scales and secure their future, or destroy their fate.

This book picks up where the last one ended: with a moment between Joclyn and Ilyan. I love Rebecca’s way of writing romantic scenes: not too graphic, but emotionally charged (after all, this is YA, not erotica).

The plot does not move at all in this book. Again, it is more focused on the characters, and building relationships between them. I will be honest, and say that I would’ve excepted more plot development, especially since Rebecca is such a good writer, and the story itself is wonderful.

I don’t like Joclyn in this book. Yes, she was tortured for three months by Cail (in her mind it was 3 months, in reality ~10 days), but I was expecting a faster recovery. Maybe the problem is that the book’s time line is so short: a few days. Therefore, we get to read Joclyn’s depression, and panic attacks in details. Most of the book, Joclyn is scared, having panic attack, attacking Ryland; she’s a mess. Maybe this had to happened in order for her to become stronger? We’ll see in the next books. She does go back to her true self at the end of the book, which is great.

Ryland, poor thing, is a shell of what he used to be. Thanks to Edmund and Cail, he is now a weapon to kill Joclyn. He does not want to feel that way, but Edmund put this thoughts into his mind. Ryland’s heart is literary broken.

My favorite person in this book is Ilyan. He does keep it together, and he such a good person.

My favorite scene is the one where Joclyn and Ilyan perform the bonding ritual. It is very touching, and beautifully written. However, I think there are way too many mushy moments: i love you up and down; after a while, they become a little bit annoying.

Ilyan and Joclyn are going up against Edmund and his followers (finally). It was suppose to be the big battle, the one described in the sight. Apparently, the sights can be broken (plot twist), and this one was one of them, so Joclyn does not know what the future holds now. They survive the battle in Spain, and they go to Prague, via a tunnel. And that’s it. I don’t know, I feel like there should’ve been more to this book, more action, more plot development.

Don’t get me wrong, it still a nice book, and pretty emotional. I just wanted a little bit more action. 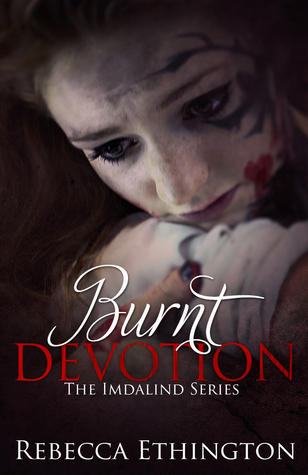 It was supposed to be the final battle, the one to end Edmund’s line, his life, and free the magic Edmund had taken from the world. That was how it was foreseen. The end of the battle that has raged for centuries, unbeknownst to the mortals around them, the battle that would end with Joclyn’s death.

But it did neither.

The battle still reigns, Joclyn still lives, and the sight that was given eight hundred years ago is broken.

And it’s not the only one.

Sights that were once thought infallible have become nothing more than scattered glass, with broken pieces shattering into incorrect visages. Sain clings to the magic that he knows to be true, but there is something else, something that he is not saying. And what he does say is no longer adding up.

Ilyan and his people move through the caves, following a sight they hope to be correct, fleeing a battle that should have been the end while the battle within each of them grows with each step.

Ryland fights the monsters his father has infected him with.

Wynifred fights the confusion of who she is.

Prague may not survive this battle, it may be ripped to shreds… or burned to ashes.

Burnt Devotion was suppose to be a novella about Wyn and Thom. We were suppose to read more about her, their relationship, and their past. After the author started writing it, she decided to turn it into book 5.

I have to say, this is my least favorite book in this series. I will split this in two: 1.what I didn’t like, and 2. what I did like.

** Around 50% of this book already happened in the Soul Of Flame. Half of book 4, but told in Wyn and Ryland’s point of view. While I like Wyn, I don’t think repeating half of Soul of Flames from her perspective it was necessary for this novel. As a novella or side novel, yes. As part of the main plot, no. I don’t understand why it couldn’t be incorporated in Soul of Flame or Ember of Eyes. Have Joclyn’s point of view, but also Wyn’s. That would’ve been better.

** Initially, it was suppose to be Wyn’s novella, her story. I was actually looking forward to it, since I love Wyn. Well, while we get some bits and piece of Wyn’s past, there is not much to it. Likewise, Thom’s history, and his relationship with Wyn is not developed.

** Since 50% of this novel already happened in Soul of Flame, the plot does not move much. Yes, they finally get to Prague, and they fight Edmund’s minions, but no big battle, or any big preparation.

** I would’ve like to see more of the little boy, and Joclyn healing him. I hope Jolyn and Ilyan adopt him ❤ .

** The relationship between Joclyn and Ilyan is not developed further. While in the past novels, the romance was a sub-plot, here is non-existing.

** I am used to Rebecca writing emotional moments between characters, or in general, and in Burnt Devotion the emotional impact is not there.

** Joclyn is back to herself, and she managed to repair her relationship with Ryland. At least a little bit. They’re back to being best friends. 🙂

** Ryland’s point of view. His chapter helped me understand him better, and why it was so hard for him to fight against Edmund. Poor Ryland. However, I do think they’re too many, especially on the first part, which was suppose to be Wyn’s novella.

** Sain. His chapters are a major plot twist. Sain is controlling Edmund?! Say what?

** Ovailia’s chapters helped me understand why she’s on Edmund’s side. Great add to the story.

** Some of the Wyn’s chapters were interesting, especially the ones in the last half of the book.

** The story is still great and fascinating, not doubt.

Maybe after I’ll read the next two books, I’ll understand why this novel was an important addition to the series.

I have to mention that Rebecca went through a divorce, and that might be the reason why this book was not that great. After all, Rebecca can write really well, which is why this book is a little bit disappointing.

I will be reading the next two novels. I hope the writing picks up in the next novel, since Rebecca is in a better, happier place.

~I’m waiting impatiently for the next book. 🙂